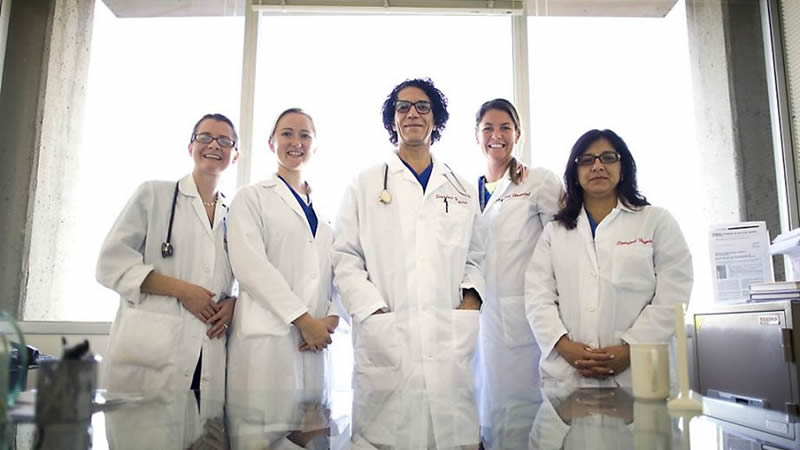 A medical review of history dating back about 4,000 years has found evidence of women being subjected to torturous treatments involving leeches, bloodletting, hot douches, being hung upside down, and even accused of demonic possession and killed – all for their inability to overcome intense pain in their pelvic area.

In ancient times, women were thought to have an “angry uterus” or to be experiencing “suffocation of the womb.” Even the famed philosopher Plato, born in Athens around 427 B.C., mentioned the extreme distress that women experienced.

What Plato observed and what others perceived as a suffocation of the womb may have been caused by endometriosis, a relatively common gynecological disease that causes severe uterus and pelvic pain.

“Women have been suffering for thousand of years from the same problem and, unfortunately at times, we have gone backward in our understanding,” said Dr. Camran Nezhat, a Stanford University gynecologist.

Nezhat and his two gynecologist brothers have spent the past five years amassing historical medical research on the issue. The Nezhats’ study, based on a broad range of research including newly digitized medical literature made available by Google Books and translations of historical sources, will be published online Thursday in the journal Fertility and Sterility. A print edition of the journal will be devoted to the study Dec. 1.

Endometriosis, which is thought to affect about 10 percent of women, is the abnormal growth of endometrial-like cells – the cells shed each month during menstruation – outside the uterus. This typically causes painful monthly periods, chronic pelvic pain and a variety of symptoms that are often misdiagnosed.

“Culturally and over thousands of years we have been taught the wrong thing: that pain with periods is totally normal,” said Nezhat, whose mother suffered from endometriosis and who, as a man originally from Iran, considers himself an “unlikely feminist.”

“They used to put women in straitjackets and throw them in prison. They thought these women were fakers and wanted to get attention, or that they were drug addicts,” he said, referring to the fact that women have often become addicted to pain medications. “Some of that attitude still exists.”

Part of the problem, he said, is that the disease can be difficult to diagnose because symptoms vary and can be mistaken for other conditions such as appendicitis or irritable bowel syndrome. The causes are unclear, and the disease can be definitely diagnosed only through minor surgery.

But, even today, women often have their complaints dismissed by physicians as normal or even imaginary, he said. As a result, some women experience symptoms for six to 10 years before being diagnosed.

Nezhat described Sigmund Freud, the father of psychoanalysis and one of the most influential thinkers of the early 20th century, as completely wrong for attributing these symptoms to “hysteria.” He said that, surprisingly, some of the ancient philosophers seemed to grasp that the pain women were experiencing was from an organic disease rather than in the sufferer’s head.

Through his research, Nezhat found documentation of women over time being accused of witchcraft or demonic possession, or of experiencing “love sicknesses,” nymphomania or mental illness. He discovered images of women writhing in pain and references to cyclic episodes which he believes were actually symptoms of endometriosis or possibly other forms of pelvic pain.

Dr. Linda Giudice, who heads UCSF’s department of obstetrics, gynecology and reproductive sciences, described the Nezhats’ study as “a beautiful chronology of the history of chronic pelvic pain through art and history.”

“No one else has looked at the chronology or done an evaluation of chronic pelvic pain of women over the centuries,” said Giudice, who has read the Nezhats’ study but was not involved in the research.

Still, Giudice cautioned, it’s difficult to determine whether the women in these images suffering pain were experiencing actual symptoms of endometriosis.

What is endometriosis? A fairly common gynecological disorder in which endometrial-like cells from the mucous lining of the womb, or endometrium, grow outside the uterus. It’s most commonly found in the ovaries, bowel and other parts of the pelvis, but can spread beyond.

What are the symptoms? Pain and cramping, often during menstruation or intercourse. Nausea, vomiting, fatigue and diarrhea may occur. The tissue can become inflamed and cysts may develop, which can also affect fertility.

How is it diagnosed? The disease can be diagnosed through examination and ultrasound. But the only way to know for sure is by looking at the tissue, typically through a minor surgical procedure called laparoscopy.

How is it treated? With medications that include painkillers and/or hormonal therapies. In some cases, surgery may be necessary.