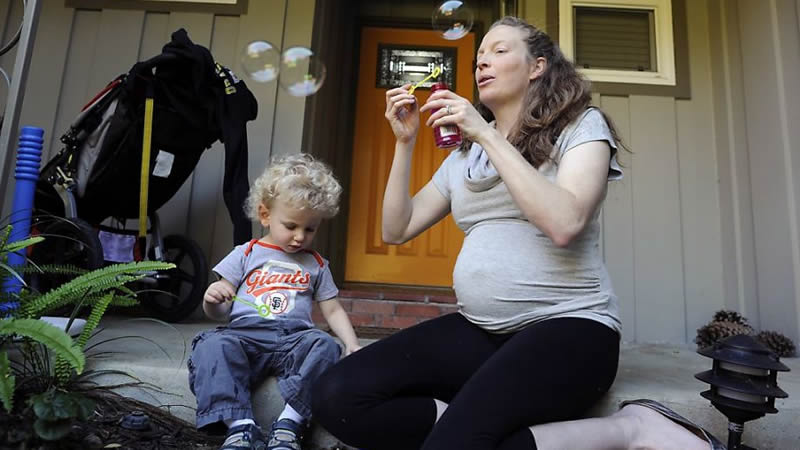 Sunnyvale resident Rebecca Silberstein, who was diagnosed with endometriosis shortly after Thanksgiving 2009, didn’t have the more classic experience of struggling with pain for years before getting proper treatment. Her symptoms came on suddenly and she quickly received care. But she found herself having to make decisions that could affect her ability to have children. Silberstein, 34, a patient of Stanford gynecologist Camran Nezhat, recalled how frightening that time was and how grateful she feels now.

In hindsight, it looks a little more obvious. I was excited because my period was late and I thought I was pregnant, so I took those home pregnancy tests and they were negative. I talked with my doctor and took a blood test. It was also negative. Then it was time to hop on a plane to visit my in-laws, so we figured if my period didn’t come, then we would look into it a little more.

A few days later, I was helping my mother-in-law give my nephew a bath. At first I thought I had food poisoning. I was curled in the corner heaving. Every biological function you could have, I was having at the same time. My mother-in-law thought I was dying. We went to the emergency room.

At the ER, they did an ultrasound of the abdomen. I remember the technician asked me, “Have you ever felt anything protruding from your abdomen?” I remember thinking, “What do you mean? Like an alien?” Then the doctor came in and told me there were cysts. They knew it was endometriosis because these were pretty big cysts – one was the size of a large lemon and the other two (combined) were the size of a medium to large pear.

They brought in one gynecologist and she talked to me about options. Our six-hour flight was the next day. She said I could stay there and have surgery, but my husband and I decided to fly back and see my doctor.

I saw my doctor the day after we got back and she confirmed the diagnosis of endometriosis. She could do this surgery but, given the extent of the cysts and how fast they developed, and because she knew we wanted children, she referred me to Dr. Camran Nezhat. We got in about two weeks later and my surgery was scheduled for Jan. 5.

One of the concerns was they might have to remove both of my ovaries, and that’s obviously a problem when you want to have kids. I had the surgery and it turned out I had pretty much had everything going on you could possibly have with endometriosis. I had the cysts and what you call “kissing ovaries.” They were pulled down so much they were touching and pulling on my fallopian tubes, which caused them to be inflamed and blocked. My fallopian tubes were stuck to my intestines. I had adhesions, fibroids and endometriosis on my bladder, bowels and appendix. I was a mess.

After the surgery, the first thing I asked the doctor was whether he was able to save my ovaries. The answer was yes. They still needed to follow up on the blocked fallopian tubes, so I was scheduled for a test about eight weeks after surgery. But by then I was pregnant so there was no point in doing it.

Now we have Leo. He’ll be 2 in November and he’s awesome. I’m also pregnant again, due in January. For as messed up as I was, I totally got lucky. I got diagnosed quickly and didn’t have to go though multiple surgeries.

Once I had seen of one of those doctor shows and endometriosis came up. I always had this feeling I had it, but I didn’t know why. I didn’t have much pain, but I had super heavy periods and I was pretty sure that was not normal. It turns out my mom had it and so did my grandmother. It would have been nice to have known that.

It’s unfortunate no one talks about this. I wished my mom would have talked to me, because maybe I would have known to start looking for things like this sooner, but I think she was trying to protect me. If I have a girl, you’ll be sure I’ll be talking to her about it.